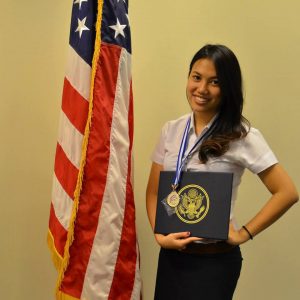 Ms. Suchawalee Mankhong BAS Class of 2012 (First-class Honours Degree) Office of Financial Management Administrative Associate United States Agency for International Development, Regional Development Mission Asia Throughout 3 and a half year of college, the most popular question that I’ve got was “What are you going to do with British and American Studies Degree?” Well, here is my facebook status during the last final exam week of my undergraduate career in December 2012, I said “Last week I was an art critic, explaining all the arts in the Western world since 18th century till 20th century. Then I was a British euro-skeptic, analyzing how EU could impact Britain. Today I was a historian, telling stories about all of the British Colonies. Tomorrow I will be an American economist, discussing about Social Security System. On Thursday I will be a literature critic, interpreting all the British and American novels. And on Friday, I will be a philosopher, thinking about how modern technologies dehumanize our souls.” And that was only 1 semester of what BAS has given me. Liberal Arts is something intangible and rather difficult to define, but I like how my American professor, Edward Knuth, put it as “’Give a man a fish and you feed him for a day. Teach a man to fish and you feed him for a lifetime.’ – Just substitute the word ‘think’ for ‘fish’ and you understand the liberal arts.”